Using the Google Translate App to Assist in Cataloging: A Brief Case Study

As Technical Services staff sizes have shrunk over the past several years, so has in-house expertise with foreign languages. While our library collects materials mainly in English, with some Spanish, we do still get the occasional item in a language no one in the library speaks or reads.

This happened recently when we were given a gift copy of a book from a Japanese publisher. An accompanying letter, written in English, said that the book contained a reprint of an article by one of our faculty members. The letter mentioned the name of the faculty member but did not indicate which chapter was his. The book itself was completely in Japanese, so our cataloger had no way of knowing which chapter in the book was the reprint. We needed to know so that we could include that information in our catalog record for the book as well as update our internal database of faculty publications.

We were able to find a bib record for the book in OCLC with an ISBN search but it didn't contain a content note. After searching in vain in various places for a record that had a detailed content note, I remembered the Google Translate app on my phone.  After opening the app and telling it I need to translate from Japanese to English, I took a picture of the chapter titles. 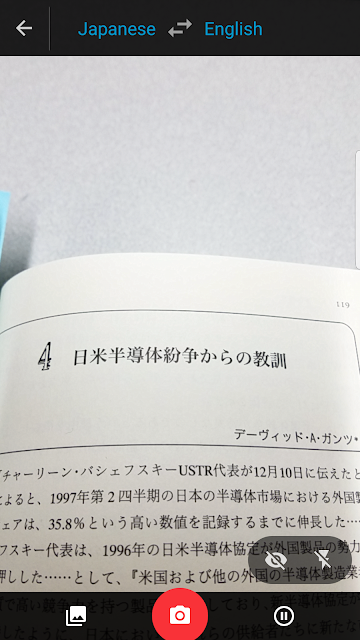 The app scanned the photo, looking for Japanese text. I was then given the option to select the text to translate or translate the entire page. Since I was looking for chapter titles and authors, I just selected those. 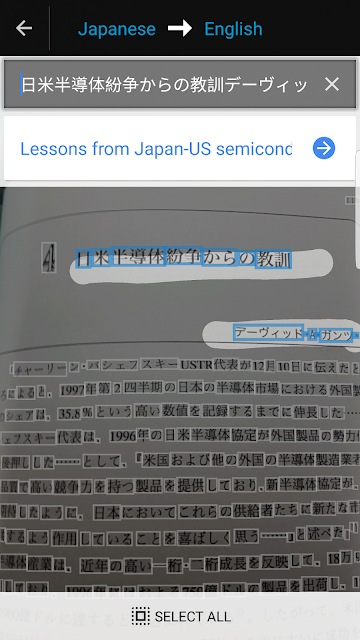 A preview of the translation was displayed at the top of the screen. I could tap through to see the full translation. When I saw the faculty member's name, I knew that I had found his chapter. 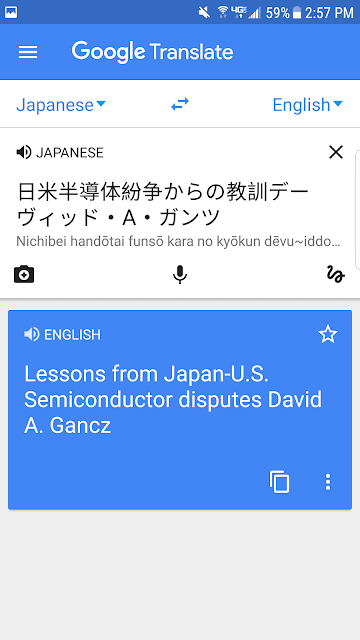 While the translation was not 100% perfect (the word "the" was missing from the title and the faculty member's name was misspelled) it was more than enough for us to recognize that we had located the reprint.

Google Translate allows for the downloading of translation files in all its supported languages. With downloaded translation files, the user can perform translations while offline. It also enables instant translation that show the translated text in situ, in real time. 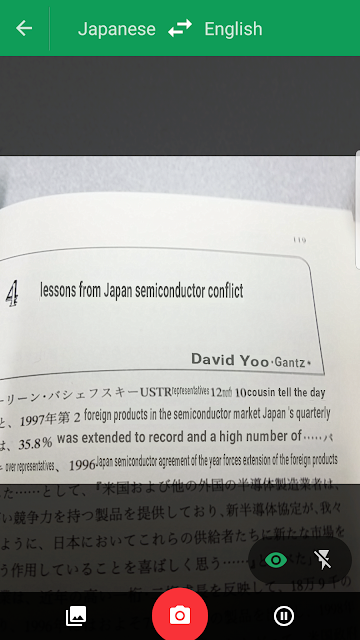 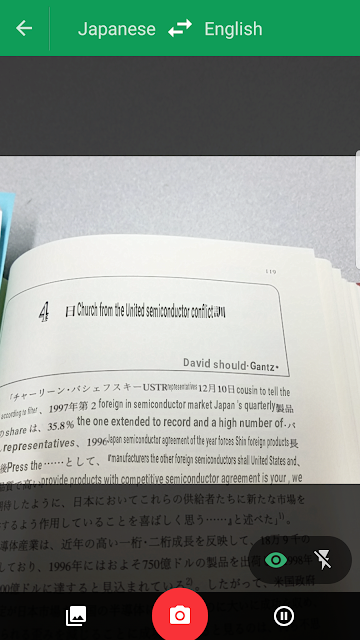 The Google Translate app, while not completely perfect, can at least point catalogers in the right direction when they are tasked with cataloging materials in languages they don't know. It also has many other features that we have not begun to explore, such as text to speech, verbal translation, and the option to hand write text on the screen to translate.

Our cataloger is eager to try the app on a few Russian language books that have been sitting on her desk for a while. The app is certainly faster than tracking down a speaker of the language or trying to enter text in Google's web-based translation service.

Posted by Travis Spence at 7:08 PM No comments: Links to this post

A recent series of posts in The Scholarly Kitchen discussed the pros and cons of RA 21: Resource Access for the 21st Century. What is RA 21, and how does it relate to more familiar means of authentication?

RA21 is a joint NISO/STM initiative "aimed at optimizing protocols across key stakeholder groups, with a goal of facilitating a seamless user experience for consumers of scientific communication." (https://ra21.org/index.php/what-is-ra21/). The basic assumption of this initiative is that IP range based authentication no longer works for users of scholarly information. In place of IP authentication and proxy servers, use of a federated authentication model is proposed.

Hinchliffe and Schonfeld express concerns about patron privacy, which may be ameliorated by  requirements of the EU General Data Protection Regulation (GDPR) scheduled for enforcement beginning in May 2018. Given some publisher's attempts to cover all aspects of scholarly work flow, would they be inclined to mine and monetize the information about a scholar's research patterns federated identity could generate? Additionally, access for walk-in users may also be an issue.

RA21 is hardly a done deal, but it certainly bears monitoring.

Hinchliffe, Lisa Janicke What will you do when they come for your proxy server?
https://scholarlykitchen.sspnet.org/2018/01/16/what-will-you-do-when-they-come-for-your-proxy-server-ra21/

Posted by Jackie Magagnosc at 10:40 AM No comments: Links to this post

Libraries have often been the incubators of novel ideas and new technology. In an effort to share AI development to a wider array of students and the public, the University of Rhode Island is opening an AI lab in their university library.


The University of Rhode Island is taking a very different approach with its new AI lab, which may be the first in the U.S. to be located in a university library. For URI, the library location is key, as officials hope that by putting the lab in a shared central place, they can bring awareness of AI to a wider swath of the university's faculty and student body.


The Dean of Libraries, Karim Boughida specifically mentions the lack of diversity of AI and its resulting issues of a biased algorithm as the reason to put an AI lab in the library, a place that values inclusivity. "Without explicit countermeasures, machine learning and AI could magnify existing patterns of inequality in our society", says Boughida.


Unlike a typical AI lab focused on research, the URI AI Lab will offer students and instructors the chance to learn new computing skills, and also encourage them to deepen their understanding of AI and how it might affect their lives, through a series of talks and workshops. The 600-square-foot AI lab will be located on the library’s first floor and will offer beginner- to advanced-level tutorials in areas such as robotics, natural language processing, smart cities, smart homes, the internet of things, and big data.

Read the whole article at https://www.insidehighered.com/news/2018/01/17/rhode-island-hopes-putting-artificial-intelligence-lab-library-will-expand-ais-reach.
Posted by Unknown at 11:10 AM No comments: Links to this post